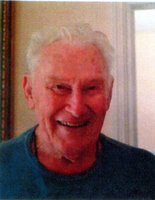 Mr. Edward J. Cole, 99, of Schuyler, New York passed away on Wednesday September 9, 2020 at the Siegenthaler Center with his loving family by his side. Edward was born in Utica, New York, on July 19, 1921, to Edward H. Cole and Neva J.(Trosset) Cole. On November 23, 1946, he married Shirley E. Cole at Blessed Sacrament in Utica, New York. Edward was devoted to his family and lived his life to the fullest. Edward was a proud Irishman who loved participating in holiday festivities and storytelling. He also loved singing, playing the organ, golfing, watching the Yankees, and spending time at camp. Edward was a lifelong member of the Roman Catholic faith. One of his proudest accomplishments was helping build St. Peter’s Church in North Utica. He was an active member of his community throughout the duration of his life and served 4 years overseas in the Marine Corps during World War II. Edward was self-employed as a professional paper hanger and painter and took great pride in his work. Edward served on various committees and organizations along with being a codes officer in Marcy for 32 years. He always believed in “paying it forward” in helping and putting others in his family and the community first. For the past three years, Edward loved nothing more than living at home with his daughter and son in law, Laurie and David, where he was able to spend time with his loved ones on a daily basis. He often spoke about how much it meant to him to have daily meals with family members or to just sit in his favorite room, the sun room. He was happy to spoil his great grandkids and ensured he always had candy on hand for whenever they were there. Edward’s family was the light of his life. He was always engaged in tasks that displayed this love by attending any event of a family member and providing support in any way he could, whether it be building a toy, singing, telling a joke, or just being present. Edward is survived by his three children Edward (Ivette) Cole, Dr. Gregory Cole, and Laurie (David) Bushey; nine grandchildren, Edward Cole, Carrie Wells, James (Monica) Cole, Christopher (Nancy) Cole, Melissa (Michael) Perkins, Amanda Bushey (Craig Soja), Sarah (Adam) O’Hearn, Kristina (David) Lentricchia, and Luke Bushey. He is also survived by twenty-one great-grandchildren: and three great-great grandchildren. Edward was predeceased by his loving wife Shirley of 71 years, his parents, three brothers, two sisters, his in-laws including a daughter in law, and a great granddaughter, Grace. The family would like to thank Dr. Emile Wassel, Dr. Andrea Johnson, Dr. Cemer, and Tom Gwilt for their dedicated service and outstanding care. Also, a very special thank you to the community at the Masonic Home. A Mass of Christian Burial will be celebrated on Saturday, September 19, 2020 at 10:00 a.m. at Our Lady of Lourdes Church, 2222 Genesee Street Utica, NY 13502. The family will receive visitors at the conclusion of the service at the church. The burial will take place at Mount Olivet Cemetery in Whitesboro. Masks must be worn, social distancing and contact tracing protocols must be followed. In lieu of flowers, donations can be made to Hospice services at the Siegenthaler Center, which provided comfort to both Edward and his family. “Goodbyes are not forever, are not the end, it simply means I’ll miss you until we meet again”.