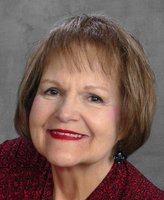 Regina Anne Amrhein Brown, 69, of New Hartford, passed away on Thursday, March 11, 2021 at Strong Memorial Hospital. Regina was born in Utica, on February 27, 1952, a daughter of the late Jack and Delores Amrhein. Regina was the second oldest of 14 children. Her first career was a telephone operator at the Nynex Telephone Company, where she worked for 27 years. She married her husband, Tom Brown in 1985 and had two children, Tommy and Travis, and retired from the phone company to raise them. After raising her children, Regina began her second career as a teacher’s assistant in the Utica School District. Regina was an active member of her community. She volunteered with the Telephone Pioneers, was a Girl Scout troop leader, Union representative of the Nynex Telephone Union, Bible group prayer warriors, president of the New Hartford PTA, commissioner of New Hartford Pop Warner, religious teacher at multiple parishes and cheerleading coach. She attended many concerts, sporting events and other activities to support her family and friends. You could always hear her no matter how large the crowd. She was an active member of Historic Old St. John’s Church, serving as Eucharistic minister, lector and RCIA sponsor to many. Regina is survived by her children; her grandchildren, Thomas and Eli; her daughter-in-law, Kandra; her siblings, Jackie Amrhein, Maureen Rubyor, Laurie (Ben) Urgan, Brian (Robin) Amrhein, Elaine Williams, Eileen (Curt) Girard, Diane (Derek) Malone, Kurt (Dee) Amrhein and Andrea (Heidi) Amrhein-Kloczkowski, as well as numerous nieces and nephews, godchildren, others to whom she was a second mother and many wonderful friends. Regina was predeceased by her husband, Tom; her mother and father; her siblings, John Amrhein, Greg Amrhein, Blaine Amrhein and Bernadette Amrhein; her nieces, Amy Amrhein and Adrianne Williams. A funeral Mass for Mrs. Brown will be held on Wednesday, March 17, 2021 at 9:30 am from Historic Old St. John’s Church, Utica. Calling hours at the Heintz Funeral Home, 408 Herkimer Rd., N. Utica will be held on Tuesday, March 16, 2021 from 2 – 7. Masks must be worn, social distancing and contact tracing will be implemented. Burial will take place in St. Joseph’s Cemetery. In lieu of flowers, the family would like those wishing to honor Regina, to support a local restaurant and have a loving night with their family.