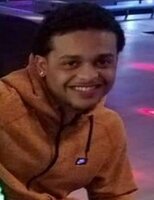 Terrence C. Coleman III (Tre’), 23, formerly of Utica, NY went home to be at peace when he passed away unexpectedly on Wednesday, October 13th 2021 in Concord, NC where he currently resided. Born in New Hartford, NY on January 20, 1998, Tre’ was the son of Terrence Coleman II “Terry” and Nacole “Nikki” Rios. He was a graduate of Thomas R. Proctor H.S., Class of 2017. He shared in a relationship with Samantha Thompson and to that union came the blessing of their beautiful daughter; LeiLani Coleman and her brother Ayden. Tre’ was an all-around sports player, from childhood Baseball and Boxing to playing many years of Pop-Warner Football and C.Y.O Basketball. He was your average gamer and would compete, all while talking trash to his friends and those online. Tre’ loved family gatherings and times of celebration, as he was always looking forward to sharing his infectious smile and was known for making people laugh. He was loved by so many relatives and friends, some who even had special names for him; “Lefty”, “Nino”, “Charles”, “Tnino120”, “Brother” “Lips” and “Punk Ass”. He brightened any room upon entering. He was his “brother’s keeper” and would sometimes discipline them as if he was the dad. Becoming a dad himself he dedicated his days and evenings to caring for his daughter even while holding a gaming controller in hand. Tre’ began his career by receiving his state certification in Asbestos removal and then later moved on to obtaining employment with Birnie Bus Co. In the fall of 2021, he then relocated to North Carolina to be with his father and brothers. Tre’ is survived by his parents, Nacole and Terry (Andrea); his brothers Ontonio and Romany; honorary brother Rumar three step-sisters Amber, Ariel & Sarah; his beloved daughter; LeiLani and her mother Samantha. He loved and respected his maternal grandparents; Melito Rios SR. and Lucy Talerico, paternal grandmother Deanna Bell; many aunts and uncles; holding a special bond with Titi Angie and Auntie Mookie. He loved his many great-aunts and great-uncles. He leaves many cousins who he adored, sharing a sibling bond with NuNu and Pablo; his Godparents Michael and Jennifer Crawford; and friends, Rumar Green, Tashaun Robinson and Anthony Graham, solid BFF’s – never to be forgotten! He will be missed by his most loyal companion; Patek. He was predeceased by his paternal grandfather; Jose’ “Clarke” Melendez maternal great-grandmother, Laura “Nonnie” Talerico paternal great-grandmother, Ethel Perry and his beloved cousin, Qasir Brown. Services will be held on Saturday, October 23, 2021 3-6pm. Arrangements have been entrusted to Heintz Funeral Home 408 Herkimer Rd. Utica, NY 13502