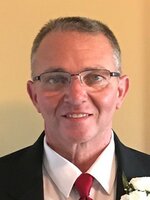 Mr. Charles “Chuckie” H. Piccione, 66, passed away peacefully on Friday, December 10, 2021 at the Abraham House, Utica, with his sons by his side, after a courageous battle with cancer. He was born September 1, 1955 in Utica NY, the son of the late Charles and Doris (Bowie) Piccione. Chuckie was a graduate of Thomas R. Proctor High School, Class of 1973. After graduation, he attended trade school for driving tractor trailer. With his CDL, he was employed by several concrete companies delivering concrete throughout the country. His last employment was as a courier, for Utica National Insurance Company, until he was too sick to continue working. In his spare time, he enjoyed riding his Harley, fishing, powerlifting, coaching baseball and football and spending time with his sons and granddaughters. Chuckie is survived by his four sons, Justin (Ashley) Piccione, New Bern, NC., Anthony (Judy) Piccione, Marcy, Matthew (Trista) Piccione and Jason Piccione and his fiancé Amanda Dellerba, both of Utica, two cherished granddaughters Alyssa and Cassidy Piccione, two brothers Joseph Piccione, New Hartford, Patrick Piccione and his best friend Tim (BINGO) Wadsworth, N. Utica and nieces and nephews. He was predeceased by his brother John Piccione. Family and friends are invited to pay their respects on Sunday, December 19, 2021 from 1-3 pm at the Heintz Funeral home, 408 Herkimer Road, N. Utica and to attend a Memorial Service at 3pm with Father Joseph Salerno officiating. It is the wishes of the family that in lieu of flowers, contributions be made to either Abraham House, Utica, 1203 Kemble Street, Utica, NY 13501 or to the Anita’s Stevens Swan Humane Society, 5664 Horatio Street, Utica, NY., 13502.