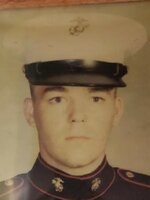 Mr. James N. Farda, 70, of Clinton and Florida, passed away unexpectedly on Monday, December 27, 2021. James was born in Utica, on December 11, 1951, the son of Fred and Marie (Duprey) Farda. He was raised in Utica and was a graduate of John F. Kennedy High School. James proudly served in the United States Marine Corps during the Vietnam War. On June 24, 1983, James was united in marriage with Wendy Stedman. For 33 1/2 years, James was employed with the Utica Department of Public Works. He enjoyed golf, horse racing and especially spending time with his cherished grandchildren and great grandchildren. He was of the Catholic faith. Mr. Farda is survived by his wife, Wendy; six daughters and four sons-in-law, Tammy and Rick Brown of Rome, Lori and Ed Brown of Clinton, Jamie Farda and Jason Bouse of Ilion, Katie and Gene Clesidor of Clinton, Kristina Farda of Rome and Catherine and Adam Meily of OH; two sons, James N. Farda, Jr., of Ava and Michael Farda of Ava; three brothers and one sister-in-law, Richard Farda of Oneida, John Farda of Rome and Bob and Michele Farda of FL, as well as several grandchildren, great grandchildren, nieces and nephews. He was predeceased by one sister, Frances Perry, three brothers, Francis Farda, Thomas Farda and Fred Farda, Jr. and a great granddaughter, Gianna. Visitation for family and friends is Sunday, January 2, 2022 from 1:00-3:00 p.m. at the Heintz Funeral Home 408 Herkimer Rd., N. Utica followed by a memorial service at 3:00 p.m. at the conclusion of visitation.