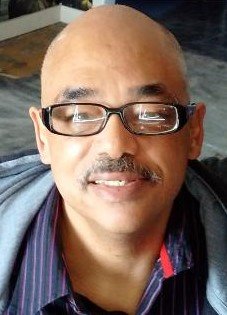 Please share a memory of William to include in a keepsake book for family and friends.
View Tribute Book
William Terrance Johnson, died unexpectedly on July 27, 2021. William, affectionately known as Terry, was born on March 28, 1960 to the late Rufus Johnson and Lois Weston, and step father, Livingston Weston. Terry was educated in the Utica School System and also attended Mohawk Valley Community College as a business major. He served in The U.S. Army and was honorably discharged. Terry was an independent vendor in NYC, working various NFL and MLB games. He was also proud of his appearance on Impractical Jokers and Showtime at The Apollo. He leaves to mourn, his daughter, Barbara Eva McIntosh of Cortland N.Y.; siblings, Joanne (Lawrence) Lucas of Prospect, KY; Michael Johnson of Utica, NY; Keith Johnson of Tampa FL and Edward Hart of Cincinnati, OH; three cousins who were like siblings, Sean Brown of Yorkville and Michelle Brown and Harry Smalls both of Utica. Two grandchildren Kayleigh Madison Ward and Ezra Fenix Hedges of Cortland, N.Y.; a special Aunt, Althea Freeman and a host of friends and family. Visitation for family and friends is Saturday, August 14, 2021 from 12:00 noon until 1:00 p.m. at Heintz Funeral Home, 408 Herkimer Rd., N. Utica, followed by a service at 1:00 p.m. at the conclusion of visitation. He will be laid to rest in Forest Hill Cemetery in Utica on Monday, August 16th at 10:00 a.m..
To send flowers to the family or plant a tree in memory of William Johnson, please visit Tribute Store
Saturday
14
August

Look inside to read what others have shared
Family and friends are coming together online to create a special keepsake. Every memory left on the online obituary will be automatically included in this book.
View Tribute Book
Share Your Memory of
William
Upload Your Memory View All Memories
Be the first to upload a memory!
Share A Memory
Send Flowers
Plant a Tree