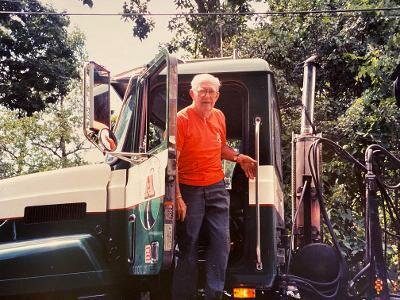 Obituary of Irving A. Juckett

Please share a memory of Irving to include in a keepsake book for family and friends.
View Tribute Book
r. Irving (Tinker) A. Juckett, 92, of Rome, NY, formerly of Frankfort, was reunited with his beloved wife, Charlotte, on Saturday, January 29, 2022 with his loving family by his side. Irving was born in West Fort Ann, NY on March 22, 1929, the son of William and Ella (Chase) Juckett. He was raised in Utica and was a graduate of Proctor High School. Tinker proudly served in the US Army from 1946 until his honorable discharge in 1948. On July 21, 1951, Irving was united in marriage with Charlotte (Twinkie) H. Eldred, a loving and devoted union of 65 years until Charlotte’s death in 2016. At one time, Irving was employed with Harbor Point and more recently, with Gorman American Asphalt in Clinton, NY, retiring in 2006 at the age of 77. Tinker was a huge NY Yankees and NY Giants fan and enjoyed playing cards, especially pitch, at Korps Corner Bar and especially with his family. He also enjoyed going to Dave’s Diner in Schuyler, which he did faithfully for over 40 years, his daily coffee and 7 doughnut holes, Take 5 Lottery tickets and his monthly pedicures. Tinker was a great story teller, often reminiscing about his many life experiences which he referred to as his “nine lives” and would tell anyone who would listen that he tarred every road in Oneida County and many of them twice. Tinker was proud to have lived through five generations of the Juckett family. He was very well respected and loved by as who knew him and was the first to return the love and respect. He was a member of American Legion Utica post 229, N. Utica and was of the Protestant faith. Tinker was also an animal lover and shared a special bond with his fur buddies, Tinker, Patches, Ernie B and Buddy. Mr. Juckett is survived by his four daughters and one son-in-law, Linda La tray of Rome, Patti Ann and Robert Kehrli of Frankfort, Beverly Juckett of Fl and Donna Huber of MS; 16 cherished grandchildren, David Baris and Lori Alderwick, Christopher Baris, Dawn and Joseph Colangelo, John Arabia, Joseph Arabia, Michael Arabia, Janice and Warren McCollough, Sandra and Jeremy Vaugn, Rema Hynes and Jacob, William and Andrea Hynes, Sherry and Joseph Jones, Patti Hynes, Robert Jr. and Cheryl Bougourd, Linda and Vish Saugh, Karen and Charlie Summers, and Janet and Shane Ardis; two sisters, Jane Shirley Schuderer of Marcy and Ella Wilma Blades of FL; one brother, William Milford of London, England; two sisters-in-law, Ellen Viti and Phyllis Ruth and Dayne Evans, as well as 41 great grandchildren, 8 great great grandchildren and several nieces and nephews. He was predeceased by his son-in-law, Ernest Latray and two sisters, Mary Ellen Spellicey and Dorothy Lena Bentley. Visitation for family and friends is Friday, February 4, 2022 from 4:00-7:00 p.m. at the Heintz Funeral Home, 408 Herkimer Rd., N. Utica. A prayer will be offered on Saturday morning, February 5th at 9:30 a.m. at the funeral home, followed by military honors. He will be laid to rest with is beloved Twinkie in Forest Hill Cemetery in Utica. In lieu of flowers, please consider making a donation to Hospice and Palliative Care, Inc., 4277 Middle Settlement Rd., New Hartford, NY 13413, in Tinker’s memory. Envelopes will be available at the funeral home. Mr. Juckett’s family extends their heartfelt gratitude to the nurses and staff of Hospice and Palliative Care, for the compassionate care you provided to Tinker. A special thank you to Tinker’s daughters, Linda and Beverly for lovingly and tirelessly caring for their father so he could stay home in his final months. Your dedication and devotion to his every need will never be forgotten. "That's What She Said" "Ditto"
To send flowers to the family or plant a tree in memory of Irving Juckett, please visit Tribute Store
Friday
4
February

Look inside to read what others have shared
Family and friends are coming together online to create a special keepsake. Every memory left on the online obituary will be automatically included in this book.
View Tribute Book
Share Your Memory of
Irving
Upload Your Memory View All Memories
Be the first to upload a memory!
Share A Memory
Send Flowers
Plant a Tree