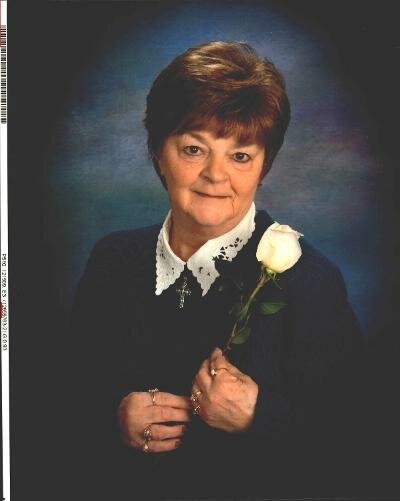 Please share a memory of Victoria to include in a keepsake book for family and friends.
View Tribute Book
Victoria Marie (Griffin) Dineen, age 76, of Utica, New York, passed away peacefully on Friday, February 11, 2022 at St. Elizabeth’s Medical Center, Utica, with her loving family by her side. Victoria was born in Richfield Springs, New York, on September 2, 1945, the daughter of the late Leo and May (Miller) Griffin. Victoria was raised and educated in the towns of Richfield Springs and Ilion. Victoria was previously married to Anthony Biamonte, the father of her two children, Angela Marie Biamonte and John Anthony Biamonte. She was grateful to be a stay-at-home mother where she could be the “homemaker” of the house, providing her children with much love and support. Victoria would say that she was lucky to have found a new love later in life when she married Thomas Dineen, who she would spend the rest of her time on this Earth with. She enjoyed going on long walks and dancing at local night clubs with her husband Thomas, where they would practice waltzing and jitterbug. Victoria and Thomas shared an equal passion for their Irish Heritage. Thomas even wore a kilt at their wedding which was followed by a two-week honeymoon to Ireland. Victoria had many careers throughout her journey of life, her last being a bus monitor for Bernie Bus Company Inc. Although work brought a sense of integrity into Victoria’s life, no career compared to the love she shared of being the grandmother to her only grandson, Ryan Anthony Biamonte. She shared a special relationship with her grandson, whom was predeceased to Victoria within the same week. She would say that Ryan was the light of her life as they did everything together and she could always count on Ryan to be a call away for help no matter the circumstances. During her early years in life, Victoria was often to be found with her dearest friends by her side. Dating back to the early 70’s, she had an unbreakable bond with a close group of friends spread throughout Cedarbrook Crescent in North Utica. In spite of the ups and downs they all shared in life, they were inseparable. Some would say that a book could be written on all their adventures. These close friends included Antoinette Talerico, Linda Intino, Joanne Destafano, and Jan Rumbutis. Later into Victoria’s adult life, these Golden Girls adventures turned into daily, highly competitive games of Yahtzee as she did not like to lose. “We will miss our games with “Vicky” as well as all the wonderful memories of life around Cedarbrook Crescent. Rest in peace our special friend.” Along with Yahtzee, Victoria began to enjoy the little things in life from puzzles, crosswords, cards, and bingo to gardening, creating flower beds and growing tomatoes. You could often find her listening to a mixture of older country music and Irish music. Her all-time favorite song was “Danny Boy”, an old Irish classic. Victoria’s family remembers packing eight people into the Cadillac for summer vacations to the Jersey Shore (Wildwood). One of Victoria’s favorite memories was our Italian Family Sunday Dinner at Non (Beatrice) and Pops (John). Her love for cooking and baking was personally taught to her from Non. Some of their best dishes included lasagna, chicken cutlets, and homemade sauce. Victoria shared a silly love for cats, especially her cat Finnegan, an Irish name of course! She would often ask her son John and his wife Elaine about their cats during every phone call that they shared together, making sure they would send her recent photos of them. In the course of these last final years, Victoria’s family never allowed for distance to get in between the love and care that they all shared for one another. Her grandson, Ryan, took gracious care of his grandmother while her children lived out of state. Her daughter Angela and her loving husband, Scott Bowers and her son John and his caring wife, Elaine Biamonte would always provide great comfort and company to Victoria throughout their many trips back and forth from their homes in Delaware and North Carolina. Victoria’s children made sure she never went without home care and cleaning services. Victoria shared all of her knowledge of motherhood to her daughter, Angela and shared all she knew about baseball and auto racing with her son, John. John and Elaine are forever grateful that Victoria made it to their wedding in Florida. She also loved her children-in-law Scott & Elaine like they were her own. Victoria never went without asking about Scott's son Ty Bowers. Victoria is survived by her husband, Thomas Dineen. Her daughter and son-in-law, Angela and Scott Bowers. Her grandson and apple of her eye, Ryan Anthony Biamonte. Her son and daughter-in-law, John and Elaine Biamonte. Her brothers, Ed and Leo Griffin. Her sisters Gloria Smaldone, Vivian McGraw, Mary Moore, Dorothy Rowlands, Pat Brownell and Doris Griffin. She is predeceased by her parents, Leo and May Griffin and her grandson Ryan Biamonte. She especially enjoyed a close bond with her sister Gloria Smaldone of Ilion and her loving family: Tony Smaldone, Gloria’s Husband, Gloria’s Kids: Lisa, Steven, Barry and Gloria’s 2 grandsons: Alan Annuntto and Alex Smaldone. Following Victoria’s final wishes, at the convenience of the family (late Spring/Early Summer) a Memorial Mass will be held at Mary, Mother of our Savior Parish/Church of Our Lady of Lourdes, 2222 Genesee Street, Utica, New York.
To plant a beautiful memorial tree in memory of Victoria Dineen, please visit our Tree Store

A Memorial Tree was planted for Victoria
We are deeply sorry for your loss ~ the staff at Herkimer Road Location - Heintz Funeral Service Inc.
Join in honoring their life - plant a memorial tree
Online Memory & Photo Sharing Event
Online Event
About this Event

Look inside to read what others have shared
Family and friends are coming together online to create a special keepsake. Every memory left on the online obituary will be automatically included in this book.
View Tribute Book
Services for Victoria Dineen
There are no events scheduled. You can still show your support by planting a tree in memory of Victoria Dineen.
Plant a tree in memory of Victoria
Share Your Memory of
Victoria
Upload Your Memory View All Memories
Be the first to upload a memory!
Share A Memory
Plant a Tree