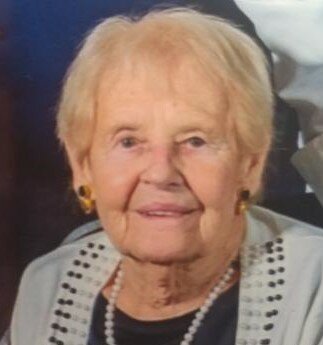 Obituary of Bernadine A. Husnay

Please share a memory of Bernadine to include in a keepsake book for family and friends.
View Tribute Book

Bernadine was born in Olyphant, PA, on February 26, 1932, the daughter of Stanley and Mary (Wolock) Ciolek.  She was raised and educated in Binghamton NY, and was a graduate of North High School.  Bernadine and her husband John enjoyed a loving and dedicated union of over 68 years and were wed at St Paul’s Church in Binghamton.  At one time, Bernadine was employed with Friendly Finance in Binghamton and later with Montgomery Ward in North Utica.  She enjoyed reading and loved cooking, especially her famous dishes passed down to her from her Ukrainian grandparents: Pirohy, Halupki, and Kolacki.  Bernadine's pride and joy was her family.  Spending time with them meant everything to her.  She was a loving wife and wonderful mom.  But she shined even more as a grandma and great grandma. She was our funny, feisty matriarch and will be deeply missed.

To send flowers to the family or plant a tree in memory of Bernadine Husnay, please visit Tribute Store
Friday
6
May

Look inside to read what others have shared
Family and friends are coming together online to create a special keepsake. Every memory left on the online obituary will be automatically included in this book.
View Tribute Book
Share Your Memory of
Bernadine
Upload Your Memory View All Memories
Be the first to upload a memory!
Share A Memory
Send Flowers
Plant a Tree