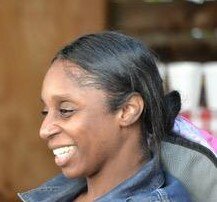 Please share a memory of Stephanie to include in a keepsake book for family and friends.
View Tribute Book

Stephanie was born in Brooklyn, NY on May 17, 1976, the daughter of Gail Jones and Steven Peterson. As it takes a village to raise a child, Stephanie was raised by her maternal grandmother, Cora M.  Jones, in South Jersey where she attended Burlington County Institute of Technology in Westampton, New Jersey. After graduating Stephanie moved to Utica and lived with her Aunts Diane, Marlene, and cousin Kenyon “Kain” Burvick as she had established special and sustained bonds with each.

In Utica, Steph, as she was affectionally called, furthered her education at Herkimer Community College completing the requirements for a degree there. More recently, Stephanie entered into Keuka College pursuing a degree in Social Welfare. Her completion was interrupted only by her illness. Throughout her 26 years in Utica, Stephanie held various positions of employment, and established herself as an asset to her community. With a heart for others, and through the years, Stephanie enjoyed employment within SNFs, social service agencies as a case-manager; as a foster care provider, and established her own daycare for working parents. Stephanie also worked with those addicted to substance at Insight House, and was a weekend supervisor at Emmaus House, a woman's shelter, for a number of years. In 2016, Stephanie finally landed her “dream job” with NYS Office of Children and Family Services in Taberg, NY as her greatest passion was working with children and youth.  She held deep religious beliefs and convictions, and found a home and family within the Church of Jesus Christ of Latter-day Saints in Whitesboro, NY whose members, Elders, and Bishop remained a constant and untiring support, not only to Stephanie, but to her family throughout her illness and beyond. Stephanie had a beautiful smile that could not go unnoticed. She was warm and humble, yet fiercely committed to her children, family, friends, principles, as well as the community she resided in. Stephanie battled her illness with the same quiet passion and determination that she lived her life. Ultimately, Stephanie succumbed to her illness with grace, and dignity as she found her peace.

The family would like to extend heartfelt gratitude to Keyon Woodard, Christina Woodard, Oneida Extended Care Unit in Oneida, NY, and the ALS Association of Upstate NY.

Stephanie’s family will honor and commemorate her life in a private gathering. Relatives and friends are respectfully invited to attend her funeral service and Celebration of Life on Saturday, June 18, 2022, at 10am at the Church of Jesus Christ of Latter-day Saints, 8439 Clark Mills Rd., Whitesboro. The family will receive visitors at the conclusion of the service.  Her entombment, in New Forest Cemetery, Utica, will be held at the convenience of her family.

To send flowers to the family or plant a tree in memory of Stephanie Jones, please visit Tribute Store
Saturday
18
June