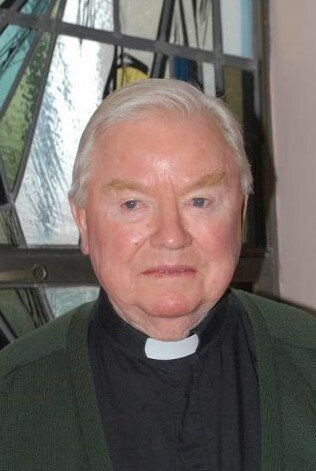 Rev. Bernard Augustine Keefe, 89, a resident of the Masonic Care Community in Utica, formerly of Schenectady and Connecticut, passed away peacefully, while praying, on Tuesday, July 26, 2022 at the nursing home.

Father Bernie was born in Schenectady, NY on April 21, 1933, the son of Nicholas and Winifred (McCullen) Keefe. He was raised in Schenectady and was a graduate of Saint Columbus High School. After graduation, Fr. Bernie enlisted in the US Navy, where he proudly served for four years. After his honorable discharge from the Navy, he began his studies to become a Catholic Priest at St. Bonaventure Seminary in Buffalo, NY. On December 22, 1963, Fr. Bernie was ordained a priest at the Cathedral of the Immaculate Conception in Albany, N.Y. He celebrated his first Mass at Christ the King Church in Albany where he served from 1963 until 1976 and taught high school during those years. He then served as an Associate Pastor at Saint Charles Church in Bridgeport CT for a short time as well as St. Peters in Danbury CT and 18 years as Associate Pastor at St. Maurice Church in Danbury. Until his retirement in 2008 he served as an Associate Pastor at Saint Aloysius Church in New Canaan, CT. After Fr. Bernie's retirement, he relocated to Utica, and assisted at St. Mark’s Church in N. Utica, until his health no longer permitted him to do so. Fr. Bernie was an avid NY Yankees and University of Connecticut (UCONN) women’s college basketball fan and enjoyed golfing, walking and easy listening music. Fr. Bernie had a kind and gentle nature that brought great peace to the people he served. His humor was also a welcomed trait that his parishioners were lucky to be a part of. If you were fortunate enough to have known him you were blessed with a great gift from God. Fr. Bernie was loved by all who knew him and will be sadly missed by all. Always remember and live by the simple, yet powerful words that he spoke so often, “Just Be Kind”.

Father Bernie is survived by his brother and sister-in-law, Paul and Rose Keefe of Albany, NY and his nephew and his wife, Rev. Deacon Richard and Donna Prusko, of N. Utica, who loving cared for him over the past 14 years. Also surviving are many cherished nieces, nephews, and great nieces and nephews. He was predeceased by his parents, Nicholas and Winifred Keefe; sisters, Alma Keefe, Alice Ryan and Audrey Prusko; his brothers, Everett Keefe and Rev. Jack Keefe and his beloved Aunt, Laura McCullen who was there to welcome him into Heaven.

Father Bernie’s family would like to say a special thank you to Dr. Kevin McCormick DO and the caring staff members of the Monroe Household for their loving care and kindness for Fr. Bernie.

A Mass of Christian burial will be celebrated at St. Aloysius Church in New Cannan, CT. on August 20th at 9:30 a.m. and later a memorial mass will be celebrated at Christ the King Church in Albany on August 23rd at 11:00 a.m. He will be laid to rest in his family’s cemetery plot in Most Holy Redeemer Cemetery in Schenectady. Those wishing to make a donation in Rev. Keefe’s memory, please consider St. Mark’s Church, 440 Keyes Rd., Utica, NY 13502.

To send flowers to the family or plant a tree in memory of Rev. Bernard Keefe, please visit Tribute Store
Saturday
20
August