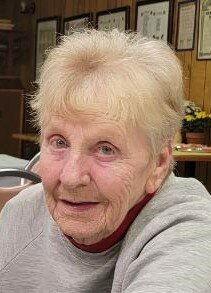 Sharon was born in Utica, on October 18, 1941, the daughter of John G. and Nellie (Schneider) Kratzenberg.  She was raised in Utica and was a graduate of Utica Free Academy.  On January 6, 1974, Sharon was united in marriage with Floyd A. Manning, a loving and devoted union of 42 years, until Floyd’s death in 2016.  At one time, Sharon was employed with Hemstrought’s Bakery, and for many years, until her retirement, with Adirondack Diner & Lanes in Barneveld, NY.  Sharon enjoyed hunting and fishing, and her greatest enjoyment was snowmobiling with her beloved grandchildren.  She was of the Episcopal faith.

Mrs. Manning is survived by two sons and daughters-in-law, James And Rebecca Ingersoll of Little Falls and Todd and Kim Ingersoll of TX; five cherished grandchildren, Holly Bozzuto and her husband, Michael of Prospect, Casey Ingersoll of MD, Ryan Miller of Little Falls, Josh Money of TX and Sarah Money of TX; 10 adored great grandchildren, Hailey-Marie, Tristen, Cody, Charlotte, Skyla, Maddelena, Myla, Scott, Sophie and Luna-Rae; one sister and brother-in-law, June and David Rank of Ilion; a brother-in-law, Larry Manning of Prospect; two sisters-in-law and one brother-in-law, Mary and Walt Synakowski of Fl and Linda Kratzenberg of Newport, as well as several nieces and nephews and great nieces and nephews. Besides her parents, John and Nellie and beloved husband, Floyd, Sharon was predeceased by an infant son, Gary Ingersoll, two brothers, Robert Kratzenberg and Rodney “Gus” Kratzenberg and a sister, Gail Swalgin.

Visitation for family and friends is Sunday, (today), August 7, 2022 from 12:00 noon until 3:00 p.m. at the Heintz Funeral Home, 408 Herkimer Rd., N. Utica.  Those wishing to make a donation in Sharon’s memory, please consider, Hospice and Palliative Care, Inc., 4277 Middle Settlement Rd., New Hartford, NY 13413.  Envelopes will be available at the funeral home.

To send flowers to the family or plant a tree in memory of Sharon Manning, please visit Tribute Store
Sunday
7
August